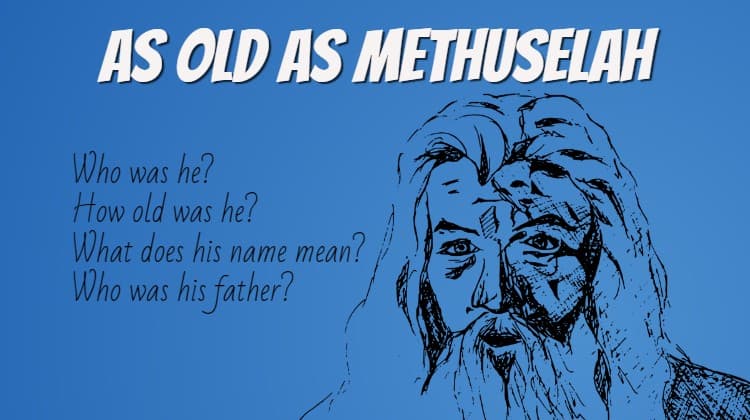 Methuselah is famous for being the longest-living person in the Bible. He lived until he was 969 years old.

In this short Bible study, we are going to discover 8 interesting facts about Methuselah including:

Contents hide
Bible Verse About Methuselah Age
Who was Methuselah’s Father and Grandfather?
Methuselah Pronunciation
How did Methuselah Die?
The Prophetic Message Contained in The Meaning Of Methuselah’s Name
A Type Of Moses And Joshua/Jesus

And all the days of Methuselah were nine hundred sixty and nine years: and he died. (Genesis 5:27)

His name is embedded in our language to such a degree that anything of great age is called Methuselah. For example:

And the list could go on. You get the picture… Because Methuselah lived longer than anyone else, Methuselah’s name is associated with anything of great age.

Who was Methuselah’s Father and Grandfather?

Enoch was the father of Methuselah and Jared was his grandfather. Enoch is also famous for the Bible says he walked with God and God took him.

Enoch was 365 years old when God took him, just a young whipper-snapper compared to how long every one lived back then.

So you have both a father and his son all those years ago still famous in our modern-day culture because of who they were in the Bible.

We do not get told in the Bible much about Methuselah’s grandfather Jared other than the fact he lived until he was 962 years old.

Methuselah nudged him out by just 7 years as the oldest living human in the Bible otherwise we might have the Jared tree or the Jared star, but no one remembers who came second.

And all the days of Jared were nine hundred sixty and two years: and he died. (Genesis 5:20)

How did Methuselah Die?

The Bible doesn’t reveal how he died just when, which is a fascinating story which we will delve into below as it ties in with the meaning of his name.

All that we know about his death is that he died the same year the flood came.

The Prophetic Message Contained in The Meaning Of Methuselah’s Name

This is where our little study gets really, really interesting. The name Methuselah in the original Hebrew means:  A Man Holding a Spear (therefore ready to attack) or a variation of this is… A Man on a Mission, as in One Sent Forth (Like a Spear).

His death shall bring… judgment!

Other meanings put forth are: His death shall bring, or when he is dead it shall be sent.

The name Methuselah in the original Hebrews was clearly prophetic, as was most names in the Old Testament.

And the thought is… the people would have had no doubt that after the death of Methuselah… judgment would come. We now know that… the judgment came in the form of the flood.

Methuselah died the same year the flood came, and Noah was Methuselah’s grandson!

A Type Of Moses And Joshua/Jesus

Moses led the children of Israel to the edge of the promised land and he couldn’t enter in himself. Moses represented the law and it is our schoolmaster that can lead us to Christ but can’t get us the rest of the way.

Likewise, Methuselah would have no doubt seen the ark as Moses saw the promised land however it was not for him to enter in. He may have even helped to build it.

Just as the Old Testament laid the foundation (helped to build) but could only go to the edge of the New Testament and all the prophets saw and enquired about the glory that would follow Christ (1 Pet 1:10), but it couldn’t be done from the old.

It was his grandson Noah whose name means rest – just as Jesus said come unto me all ye who are heavy laden and I will give you rest (Mt 11:28) – Noah was a type of Christ.

Noah found grace in the sight of the Lord!

So in the story of Methuselah, Noah, and the flood we see parallels with Moses, the promised land, law, and grace.

Those who sinned died (law) and those who found grace lived!

As the video says, it surely can not be a coincidence that Methuselah was the longest living person in the Bible. His name meaning of his death shall bring judgment and the long delay between the prophecy and the fulfillment ties in with…

The Lord is not slack concerning his promise, as some men count slackness; but is longsuffering to us-ward, not willing that any should perish, but that all should come to repentance. (2 Pet 3:9)

In summary, this is yet another Bible story that ties in with the rest of scripture.