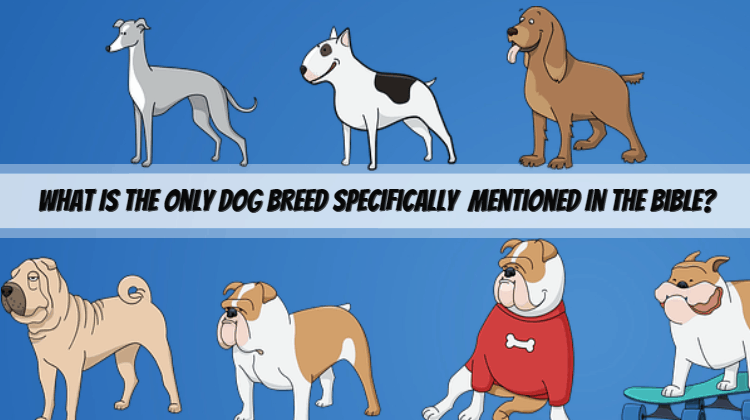 The word dog or dogs is mentioned many times in the Bible however it might surprise you to know that only one specific breed was ever mentioned in the scriptures.

What Is The Only Dog Breed Specifically Mentioned in The Bible? The answer can be found in Proverbs 30:31 (KJV) where it mentions the GREYHOUND! However, not all Bible translations agree so make sure you read on to learn more… Is Greyhound The Correct Translation?

The word in the original Hebrew translated as a greyhound in the KJV version is mothen, which is interestingly used 47 times in the Bible and translated as loins 42 times, side 4 times, and greyhound just once.

Most people believe it can’t be loins or side because the scripture is talking about animals and as shown in the image above the exact animal is unknown and perhaps an extinct animal.

The meaning of the Hebrew word mothen is further explained as being from an unused root meaning to be slender; properly, the waist or small of the back; only in plural the loins:— greyhound, loins, side.

So whatever animal it was the slender form of the greyhound certainly fits the description.

Greyhound, Strutting Rooster, Or A Horse Girt In The Loins?

The KJV, NKJV, ASV, WEB, and HNV versions of the Bible all go with greyhound as the animal referred to.

However, the NLT, ESV, CSB, NASB, NET, RSV, and NIV versions of the Bible translate the animal as a strutting rooster.

And just for another animal option, the DBY version of the Bible translates it as a horse girt in the loins.

Finally, the YLT translates the verse like this… A girt one of the loins, or a he-goat, And a king — no rising up with him.

All Of The Options Can Be Used To Illustrate What The Author Was Trying To Convey?

The context of the verse fits between Proverbs 30:29-31 – where the author is addressing four things that look good or are stately in their stride.

The author then mentions the lion, greyhound, He-goat, and a king as the 4 things and any of the animals mentioned above could describe what he is talking about.

The context of the scripture is those who have something special about the way they walk, stride or go. Some translate it as strut – these things know how to strut their stuff.

So if it was a greyhound it is obviously impressive in the way it goes because of its speed.

The strutting rooster or the horse girt in the loins would also certainly describe animals that would strut their stuff and walk with a stately stride.

In summary, if you are at a quiz night and the question is asked… What Is The Only Dog Breed Specifically Mentioned in The Bible?

The correct answer will be the greyhound.

However, you now know there is a little more to the story!

Another question quite often asked is…

However, I have seen a wide variety of different answers provided on the internet for this question with some saying just 14 and other as high as 44. I’m not sure where they get those numbers from so I’m sticking with my own research that says dogs appear 41 times in the Bible.