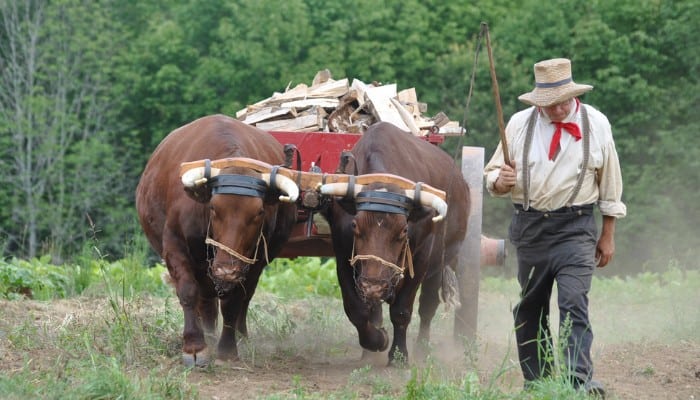 Sometimes we read words and related words without really understanding fully what they mean. Once we explore some of these words and see how they are used in the Bible we can get some real aha moments. One such word is oxgoad…

Contents hide
In The Bible What Is An Oxgoad
What Did Shamgar Use To Kill 600 Philistines?
Who is Shamgar in the Bible?
What Does Kick Against The Pricks Mean?
We Are Gods Oxen
Be Not Unequally Yoked With Unbelievers
Take Jesus Yoke Upon You
Now When They Heard This, They Were Pricked In Their Heart

In The Bible What Is An Oxgoad

The meaning is quite evident by the very word itself. Ox as in the animal and goad as in to prompt, drive, or urge. In modern terminology, we use the phrase to be goaded into doing something and it means to provoke or annoy someone into action.

The actual oxgoad was a very common farming instrument that was made of wood, was about 8 feet long, had a pointy end that was used by a plowman to prod the oxen, and to guide them where they are meant to go.

To goad is to prod and we are probably more familiar with the term cattle prod.

What Did Shamgar Use To Kill 600 Philistines?

In Judges 3:31 we read where Shamgar delivered Israel and he was famous for killing 600 Philistines with an oxgoad.

Now, only one small paragraph is devoted to this story and at first reading, we think this would have been 600 in one go however that is not necessarily the case.

At this time Israel was oppressed by the Philistines and many believe that all of Israel’s weaponry would have been taken from them.

So they would have had nothing left to fight with other than their crude farming instruments such as the oxgoad.

So, while it may have been all at once it is more likely this was talking about a period of time where Shamgar fought against the Philistines and he was able to kill the well-armed and trained enemy with nothing but an oxgoad.

Some oxgoads would have been about 6 inches round and had a steel spike on one end like a spur or miniature sickle and so it could have been quite a strong weapon.

Who is Shamgar in the Bible?

Shamgar is a great example of many Bible heroes who have done amazing feats yet their story is just touched upon and very little is known about him apart from the fact he was the third judge of Israel. (We assume this by the context but the Bible doesn’t actually say he is a judge)

We are told he is the son of Anath who is also only mentioned in the same two verses that Shamgar is talked about. So we get very little insight into who Shamgar is.

Jdg 5:6 is the only other reference made about Shamgar. Here we get more detail about the dangerous time Shamgar lived in caused by the oppression of the Philistines.

The resulting fear of the people caused the highways to be abandoned and travelers took to winding paths.

What Does Kick Against The Pricks Mean?

In Acts 9:5 we read Jesus appearing to Paul and saying… I am Jesus whom thou persecutest: it is hard for thee to kick against the pricks.

So get this… The meaning of the Greek word for pricks is – A sting – as from an iron goad, for urging on oxen, horses, and other beasts of burden.

And hence the proverb, “to kick against the goad”

When an oxgoad was used it would prod the ox to go where the driver wanted it to go however if it kicked back against the prod (common with young oxen just learning) the sharp end of the oxgoad would penetrate further causing more pain.

Kicking against the goad was futile, and therefore stubbornness causes more discomfort.

This was the description used about Paul’s stubbornness to come to the Lord. The prod or the oxgoad can be a symbolism of the Holy Ghost when we first hear the message convicting us of sin (Jn 16:7-14)

We are all pricked in the heart when we hear the word and we either take direction and go where the driver (God) wants us to go or we kick against it and cause ourselves needless pain and suffering. We are actually impaling ourselves on the sharp barbs of the oxgoad.

We Are Gods Oxen

(1 Cor 9:9-10) When talking about supporting others financially who in the work says we are not to muzzle the oxen that treads out the corn.

Does God take care of the oxen?

In the law, when you were plowing your field and the oxen wanted to eat you were not be a ruthless owner and whip them to keep them going.

The law said you were to treat them kindly and allow them to eat – therefore partake of what they were helping to produce.

Paul goes on to say this was written not just for oxen but for our sakes: that he that ploweth should plow in hope; and that he that thresheth in hope should be partaker of his hope.

And again he repeats the same again in 1 Tim 5:18 and adds – The laborer is worthy of his reward.

God is the driver (plowman) and we are to plow. In our own life and the world, we are to break up the fallow ground. Make the ground ready so that you are not sowing among thorns or the ground is so hard the seeds don’t take root.

Jer 4:3 – Break up your fallow ground, and sow not among thorns.

Hos 10:12 – Sow to yourselves in righteousness, reap in mercy; break up your fallow ground: for it is time to seek the LORD, till he come and rain righteousness upon you.

What an amazing scripture…

Be Not Unequally Yoked With Unbelievers

2 Cor 6:14 – Be ye not unequally yoked together with unbelievers: for what fellowship hath righteousness with unrighteousness? and what communion hath light with darkness?

We need to come out and be separate. Imagine being yoked together with another ox that continues to kick against the pricks. Nothing would get done, it would cause grief to the entire team of oxen with kicking and struggles all over the place.

If you join with someone who does not agree with Gods promptings you will have nothing but despair whether it be joining with other Church groups who don’t obey scripture, marrying an unbeliever, going into business, or anything else you will be compromising your standards and it will be drama packed.

Take Jesus Yoke Upon You

Jesus yoke is so much better than the alternatives.

We have been delivered from the law which so many want to go back to. It is the yoke of bondage (Gal 5:1) a yoke that no one has been able to carry (Acts 15:10)

In summary, sometimes the simple things are so wonderful. Who would have thought we could have got so much out of an oxgoad.

I know when I discovered that kicking against the pricks was referring to the oxgoad it was a real aha moment. I have been pricked in the heart as has many others.

It is the goading and therefore the prompting of the Lord. Are we going to obey his promptings or are we going to kick against the pricks and cause ourselves harm?

Now When They Heard This, They Were Pricked In Their Heart

Acts 2:37-38 describes people who were pricked in the heart when they heard the gospel message.

So much so they asked the disciples… Men and brethren, what shall we do?

Then Peter said, Repent, and be baptized every one of you in the name of Jesus Christ for the remission of sins, and ye shall receive the gift of the Holy Ghost.

If you are wondering what to do the answer doesn’t get any plainer than that. Yet so many modern-day religionists will tell you a different answer if you ask them.

In fact, it is amazing how people lash out at this message. Yes, there is a lot of people who even profess the name of Christ who well and truly kick against the pricks rather than obey what is clearly written.

The disciples told us what to do when our hearts are pricked!!