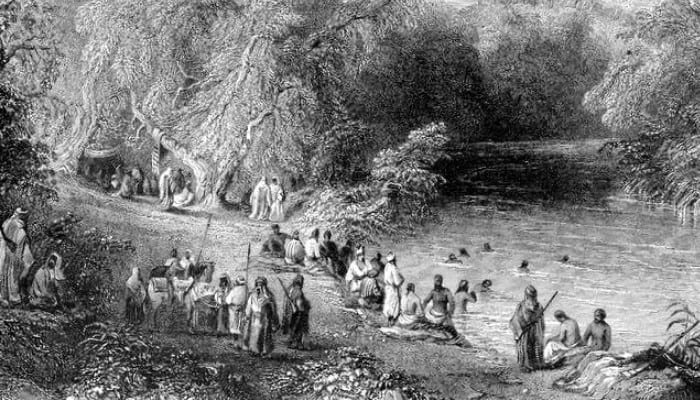 Baptism is way more important than modern-day preachers teach and in fact, many of the things said about baptism are totally contrary to what the Bible teaches.

Also, while not covered in any detail in this study when I use the word baptism it refers to going fully under the water – therefore full immersion baptism by someone who is old enough to believe that Jesus is the Son of God.

So let’s see why the Bible says baptism is important…

Contents hide
1: Baptism Is Confessing (Demonstrating Repentance of) Your Sins
2: Jesus Got Baptized
3: Baptism Is Part Of The Great Commission
4: He That Believes AND Is Baptized Shall Be Saved
5: You Justify God By Being Baptized
6: Refusing Baptism Is Rejecting The Counsel Of God
7: Jesus Disciples Baptized More People Than John The Baptist
8: Be Baptized Everyone Of You
9: They That Gladly Receive The Word Get Baptized
10: What Is Stopping You From Being Baptized?
11: You Should Be Baptized As Soon As Possible
12: Peter Commanded Baptism
13: Baptism Is How You Connect To Jesus Death
14: Baptism Is The Burial Of Our Old Life
15: Baptism Is The Answer Of A Good Conscience Toward God
Baptism Is Not A Work

1: Baptism Is Confessing (Demonstrating Repentance of) Your Sins

This doesn’t mean they told John the Baptist every single sin they have ever done. The very fact they got baptized was confessing their sins.

Another way of stating this is if you refuse to get baptized you are refusing to admit that you are a sinner.

Jesus was sinless yet he showed by example that we should be baptized. If Jesus got baptized why shouldn’t you?

When speaking to John the Baptist he said, It becometh us to fulfill all righteousness.

Water baptism and Holy Ghost baptism are involved in the fulfillment of all righteousness. John chapter 3 uses the term born again, you MUST be born of the water and Spirit.

If you read through the book of Acts you will clearly see the combination of water baptism and Holy Spirit.

3: Baptism Is Part Of The Great Commission

Modern-day religion seems to go to great lengths to say baptism isn’t essential. If that’s the case then why did Jesus give us instructions to baptize people?

4: He That Believes AND Is Baptized Shall Be Saved

I have seen so many arguments of people saying this verse doesn’t mean AND. They say, ‘See… the second part of the verse only says those who don’t believe will be damned – not those who are not baptized”

My goodness… The whole point is believers get baptized. Isn’t it glaringly obvious that if someone doesn’t believe they are not going to get baptized?

What a ludicrous argument. The fact is if you don’t get baptized it doesn’t matter how much bleating comes out of your mouth protesting the contrary you are clearly demonstrating that you don’t believe.

5: You Justify God By Being Baptized

It is important to itemize what you are doing when you get baptized:

If you refuse water baptism you are doing the opposite to the items mentioned above. You are declaring openly your contempt for God’s ways, his justice, and his righteousness. Just like the following people did…

6: Refusing Baptism Is Rejecting The Counsel Of God

Look how serious baptism is. They who refuse to be baptized in this scripture passage were the religious leaders and it just so happens that modern-day Christian religious leaders seem to be leading the charge against the necessity of baptism.

They are rejecting the counsel of God. Can you think of anything more serious than that?

Don’t be foolish enough to reject the counsel of God and refuse his plan/purpose for you.

Also, disciple means followers. If you want to be a disciple/follower of Jesus you obviously need to follow – refusing baptism is not following.

8: Be Baptized Everyone Of You

Peter couldn’t be clearer when he was asked – “What shall we do?” and as part of his instructions, he said, “be baptized EVERY ONE YOU”.

Hardly the optional extra, or if you feel like it instructions you will get from modern leaders.

9: They That Gladly Receive The Word Get Baptized

If you refuse to get baptized or want to argue about it then you are obviously not gladly receiving the word. You are not willing to receive his word and you refuse to accept his word.

Gladly means gladly, with pleasure, with joy. Other translations use: They that received his word were baptized. Those who accepted his message were baptized

10: What Is Stopping You From Being Baptized?

The eunuch said to Philip – “See, here is water; what hinders me from being baptized?”

11: You Should Be Baptized As Soon As Possible

You will constantly see through the book of Acts that people were baptized immediately, the same hour, or straightway.

In fact, Ananias said to Paul… Why Wait? Arise, and be baptized?

Now, who are you going to listen to? Someone like Peter who was there with Jesus who was instrumental in the leadership of the early church or some Johnny Come Lately preacher?

Peter commanded baptism and that’s way different to Preacher Johnny Come Lately – however, I have even heard modern-day preachers state that Peter didn’t understand and Paul came along later and taught him differently.

Do you believe that? Don’t listen to these people… Listen to Peter.

13: Baptism Is How You Connect To Jesus Death

Did Jesus die for you? How does his death almost 2000 years ago have any effect today?

14: Baptism Is The Burial Of Our Old Life

The whole reason we need to come to the Lord is that we have been living a life that is sinful.

We have all fallen short and unless we are born again we can not enter the Kingdom of God.

We have to die. The wages of sin is death and we can die now in the waters of baptism – our old man is crucified and we a buried with Christ.

Don’t you see how this ties in with the grace of God?

The religious leaders refused to get baptized and the Bible says they have rejected God’s plan for them.

We are guilty and worthy of the death penalty and baptism is how you can die yet live.

15: Baptism Is The Answer Of A Good Conscience Toward God

Don’t you want to appeal to God for a good conscience – baptism is how you make that appeal.

Baptism Is Not A Work

One of my pet peeves is that modern preachers say baptism is a work and nothing can be further from the truth, what a distortion of the word of God.

Work is something you can boost in.

Have you ever seen anyone boost how brilliant they were when they got baptized?

Of course not! There is nothing that involves works in baptism.

It is so humbling to be in that water. You totally surrender – again where is the work?

You are asked if you believe that Jesus is the Son of God, and died for your sins, and rose again for the justification of your sins.

How is that work?

If that’s work then so is repeating the so-called sinner’s prayer!

Someone else even baptizes you – so again where is your work in that?

It is the answer to a good conscience – so if you refuse to get baptized does that mean you are holding onto your bad conscience?

There is a lot more work involved in refusing to be baptized.

Not burying your old life is more work – who wants to carry all that old baggage around?

Walking around with a bad conscience is more work then having a good conscience towards God.

Baptism is confessing your sins, it is an outward action of your repentance. There is more work involved in holding onto your sins and not repenting.

In summary, what does hinder you from being baptized?

If you believe that Jesus Christ is the Son Of God then you qualify – it’s time to be baptized.