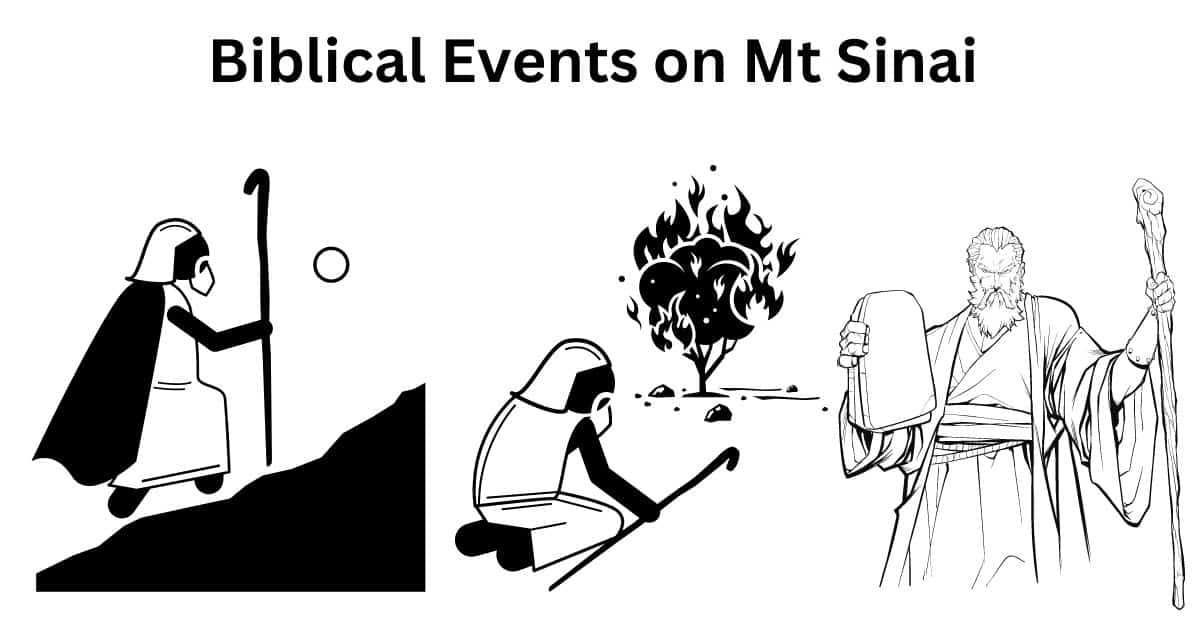 It is believed that the name Mt Horeb was later changed to Mt Sinai with Sinai possibly meaning the place of the burning bush.

This suggests that the name Mt Sinai may have been chosen because of the presence of thorny bushes on the mountain, perhaps in reference to the burning bush that appeared to Moses on Mt Horeb.

Already we are seeing an interesting parallel with Jesus Christ. He is the tree (or bush) of life. He will baptize you with the Holy Ghost and fire. So from the midst of the bush, God speaks through the fire, yet the bush is not consumed. Of course, the reference to thorns stands out as Jesus was crowned with a crown of thorns. Amazing stuff!

So let’s start with the burning bush…

A significant event that happened on Mt Horeb in the Bible is the encounter between Moses and the burning bush. In this story, Moses was tending to his father-in-law’s sheep when he came across a bush that was on fire but was not being consumed by the flames (Exodus 3:1-6).

God spoke to Moses from the burning bush and called upon him to lead the Israelites out of slavery in Egypt and into the Promised Land (Exodus 3:10). Moses was hesitant at first but ultimately agreed to carry out this mission (Exodus 3:11-12).

One of the most well-known events that occurred on Mt Sinai / Mt Horeb in the Bible is the revelation of the Ten Commandments to the Israelites (Exodus 20:1-17).

According to the Bible, God spoke to the Israelites through Moses and gave them the Ten Commandments, which are a set of moral and ethical guidelines that outline how the Israelites should live their lives (Exodus 20:1-17).

These commandments include instructions such as not worshiping other gods (Exodus 20:3), not taking the Lord’s name in vain (Exodus 20:7), and keeping the Sabbath day holy (Exodus 20:8-11).

After the Israelites left Egypt and were wandering in the wilderness, they came to Mt Sinai and set up camp there (Exodus 19:1-2). While Moses was on the mountain receiving the Ten Commandments from God (Exodus 20:1-17), the Israelites grew impatient and asked Aaron, Moses’ brother, to make a god for them to worship (Exodus 32:1).

Aaron complied and fashioned a golden calf out of their gold jewelry (Exodus 32:2-4). When Moses returned and saw the Israelites worshiping the golden calf (Exodus 32:5-6), he was enraged and broke the tablets containing the Ten Commandments (Exodus 32:19).

The Giving of the Law

The laws were meant to help the Israelites live in accordance with God’s will and to create a just and fair society (Exodus 21:1).

After receiving the Ten Commandments and the laws from God, the Israelites entered into a covenant with God on Mt Sinai. This covenant was a binding agreement between God and the Israelites, in which God promised to protect and bless the Israelites if they followed his laws and commandments.

In return, the Israelites promised to worship and serve God alone. The covenant between God and the Israelites was a crucial part of their relationship and formed the basis for their nationhood as the people of Israel.

The Cloud and the Fire

In return, the Israelites promised to worship and serve God alone (Exodus 24:3-8). The covenant between God and the Israelites was a crucial part of their relationship and formed the basis for their nationhood as the people of Israel (Exodus 19:3-6).

The Construction of the Tabernacle

After the Israelites entered into the covenant with God on Mt Sinai, they were commanded to build a tabernacle, or a portable sanctuary, for God to dwell among them (Exodus 25:8-9).

The Sound of Trumpets

Another event that is mentioned in the Bible as happening on Mt Sinai / Mt Horeb is the sound of trumpets (Exodus 19:19).

God commands the Israelites to set boundaries around the base of Mt Sinai and warns them not to touch the mountain or they will be punished. Then, in verse 16, it says that on the morning of the third day, there were thunder and lightning, a thick cloud on the mountain, and a loud trumpet blast, which sounded increasingly louder.

The trumpet blast was a sign that God was about to speak to the Israelites from the mountain. This event is significant because it shows the power and majesty of God and the reverence with which the Israelites were to approach him. It also foreshadows the revelation of the Ten Commandments, which occurred later in the story.

And of course… the last trump will sound just prior to Jesus returning. So… before the Israelites could hear God’s word there was a trumpet. Jesus, the word of God, will return with the sound of the trumpet.

The Bible says that the Israelites were commanded to blow trumpets at various times, such as during the Feast of Trumpets (Leviticus 23:24) and when they were preparing to go to war (Numbers 10:9).

The sound of the trumpets was meant to call the Israelites to worship and to remind them of God’s presence and protection (Numbers 10:10).

In conclusion, Mt Sinai / Mt Horeb played a crucial role in the history of the Israelites and their relationship with God. This mountain was the site of many significant events, including the revelation of the Ten Commandments, the encounter between Moses and the burning bush, the giving of the law, and the construction of the tabernacle. These events helped to shape the identity and beliefs of the Israelites and continue to hold great significance for people of the Jewish faith today.

You may also be interested in… Biblical Events That Happened at Jericho and  What Does The Lord Love?